Perhaps one of the best kept secrets in Wisconsin’s bowling scene, BCAW’s Miller Lite Wisconsin Pins Over Average Tournament concluded this past weekend with 36 bowlers from around the state earning a spot to compete for their share of $2,800 in prize money.  All bowlers who advanced to the state finals at Whitetail Lanes in Amherst Junction received a minimum of $20 cash when they checked in for their squad.  The remaining $2,080 in prize money was distributed based on a 1:5 ratio.

The event featured two average based divisions, 174 and under and 175 and over with bowlers earning a spot at the state event through local in-center qualifiers.  This year we had 11 centers conduct qualifiers. 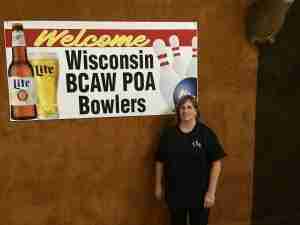 In the 174 and under division, Teresa Lemke of Wally’s Seymour Bowl bowled +52 to win the $350 first place prize.  She entered with a 143 average and bowled 481.  She finished strong with a 204 game to edge out defending champion Nicole Puerner of King Pin Lanes by just three pins!” 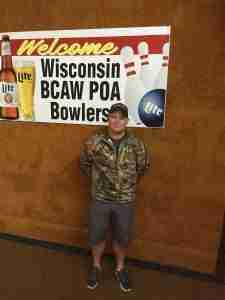 Local bowler Brad Cieslewicz came in with a 233 average, so he was going to need 700+ just to beat his entering average.  Up for the challenge, he rocked the tournament high game of 265 to start his 737 series on the opening squad of the tournament Saturday afternoon.  His +38 effort held up, earning him $525 for the win.

With two no-shows, $40 was moved over to the main prize list.  The full prize list may be viewed here.

BCAW appreciates MillerCoors’ support of this event in 2017 with their $1,000 added money sponsorship!  Thank you to our members who conducted league & tournament events to qualify their bowlers for this event, as well as everyone at Whitetail Lanes for hosting this year’s state finals.

Look for information in early 2018 about next year’s Wisconsin Pins Over Average Tournament.