In the girls division Sun Prairie’s Amber Olson and Taylor Jenson posted the only plus score, shooting 860; earning a scholarship prize of $240 (or $120 each).  Low to cash (7th place) was 777.  High game for the girls was a 265 by Maddison Kuhlow & Skila Burlingame, which helped them to fourth place overall in the girls division.

The boys division saw higher scores, with 957 by Payne Fakler and Tyler Mouthey winning the event.  Fakler & Mouthey are from Nathan Hale & Greendale in District 1.  The pair split the $400 first place scholarship.  The final scholarship prize (19th place) was won with a score of 825.  Andrew Olson & Jeromey Hodsdon rolled the tournament’s high game of 280, helping the duo to a third place finish for the boys/coed.

A complete listing of the final standings are posted on the BCAW website .

BCAW thanks Storm for being our title sponsor, providing added money to the prize fund. 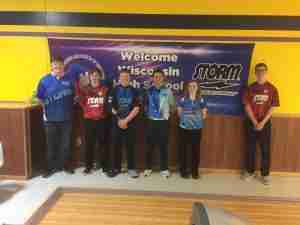