Celebrate Excellence With BCAW on October 1, 2018

The BCAW Award of Excellence honors bowling center owners, proprietors, managers and others who have contributed to bowling in Wisconsin in a significant way over time.  This year’s honorees are great examples of what this award is all about.

Paula & Bill Hilbert of Sheboygan Falls are the owners of Lakeshore Lanes in Sheboygan.  The Hilbert name is synonymous with bowling throughout much of the state as family patriarch Frank Hilbert  owned & operated as many as 12 centers during his illustrious career here in Wisconsin.  Today son Bill and his wife Paula have continuously given to their community through their 24 lane center.

They are active with their local USBC association as well as the high school and middle school bowling programs.  Hosting events such as the Sean Yonan Memorial Tournament, the Wisconsin Adult Youth Scholarship Tournament, as well as coaching and practice sessions to advance youth bowling in Sheboygan County, Paula & Bill have made a real difference through bowling. 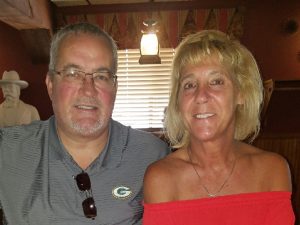 Dave Scherbarth is also a second generation proprietor, having grown up along side his father Neil and brother Gary at Highland Lanes, an eight lane center in Milwaukee.  Dave started attending BCAW and BPAA events as a child, along with his family.  He has continued the experience with his daughters Amanda & Samantha, as they have also attended BCAW events with their dad in recent years.

BCAW has benefited from Scherbarth’s reputation and connections throughout Milwaukee.  As a Greater Milwaukee Bowling Association Hall of Famer, he has demonstrated passion and dedication to bowling throughout the city and suburbs.  We have several new owners as members in the association, thanks to Dave’s networking efforts. 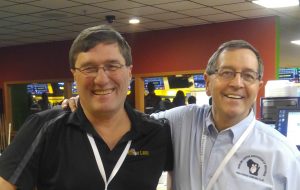 Bob Maki (right) with Dale Elliott at the 2018 HSBC Championships

This year will be also be awarding a Special BCAW Award of Excellence to former BCAW staffer Bob Maki.  Bob is known throughout the United States as a premier instructor of both coaches & bowlers, having working for USBC responsible for the early development of their coaching curriculum.  He brought that love of the game and coaching to BCAW where he created programming to bring top level instructors from around the country to share their knowledge and experience here in Wisconsin.

Through his dedication and loyalty to BCAW, Bob was instrumental in the transition when BCAW hired a new executive director in 2014.  Working with proprietors and key volunteers, he brought improvements to the Wisconsin High School and Middle School Bowling Clubs and helped create the Miller Lite Adult Pins Over Average Tournament.

We will be presenting the awards to our BCAW Award of Excellence honorees on Monday, October 1, 2018 at our BCAW Annual Meeting, Awards Luncheon & Trade Show in Wisconsin Dells.  The Celebration of Excellence Luncheon is open to all who wish to join in honoring this year’s award winners.  For more information and to register for the event, please go to our website.

On behalf of BCAW and our 210 member centers, congratulations and THANK YOU to Paula & Bill, Dave and Bob for your contributions to BCAW over the years!