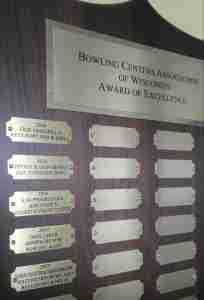 BCAW created the “BCAW Award of Excellence” to recognize contributions to BCAW and bowling throughout Wisconsin.  Those honored are selected annually from nominations submitted to BCAW for consideration.  The nine-point criteria for this award focuses on demonstrated results in helping to grow bowling not only in their center but in their community and the state.  Supporting the BCAW and its programs through engaged participation will be a hallmark of recipients.

BCAW is committed to recognizing outstanding contributions to the bowling industry in Wisconsin with equal opportunity for this award without regard to the size of the bowling center they are affiliated with.  To that end, the goal is to have two “BCAW Award of Excellence” honorees each year based on center size; 12 lanes & fewer, and over 12 lanes.

The nomination form for the 2020 awards may be found HERE.  Completed nominations are due to BCAW Executive Director Yvonne Bennett no later than September 20, 2020.  Nominations will be reviewed and award winners selected by a committee appointed by the BCAW President.  Winners of the “BCAW Award of Excellence” will be recognized during the VIRTUAL BCAW Annual Meeting  on Monday, October 26th. (Edited to indicate we will not be hosting the 2020 Awards Luncheon due to COVID-19.)