BCAW is excited to announce that through the sponsorship of Storm Products, Inc., Kelly Kulick will be attending this year’s Wisconsin High School Bowling Club’s State Championships Tournament being held at Dale’s Weston Lanes March 4-6, 2016.

A graduate of Morehead State University, Kulick was a member of the 1998 National Championship Team.  She capped off an impressive amateur career when she won the US National Amateur Championship in 2000.  In 2001 she was the Professional Women’s Bowling Association’s Rookie of the Year. Her bowling resume includes six majors including three US Women’s Opens  and two USBC Queens.

Kulick made history as  the first woman to win on the Professional Bowlers Association (PBA) National Tour, capturing the PBA Tournament of Champions in 2010 when she defeated Chris Barnes 265 – 195.

With the recent relaunch of the Professional Women’s Bowling Association’s tour in 2015, Kulick averaged 213 and ranked in the top five in all major statistical categories including championship rounds (1st), match play (2nd) and cashes (T2nd). 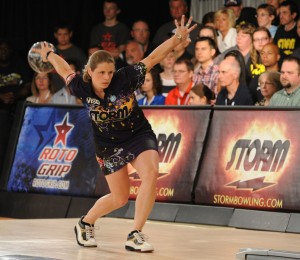