The 2016 Wisconsin Middle School State Bowling Championships were held on May 7 with 57 teams and 240 singles players competing in the end-of-year tournament at Ashwaubenon Bowling Alley in Green Bay.  Each earned their bid to the state championships based on local competition at the district level.

In the singles competition, the 240 student athletes were divided into one of seven divisions based on gender and average.  They bowled three games with total scratch pinfall determining our champions. 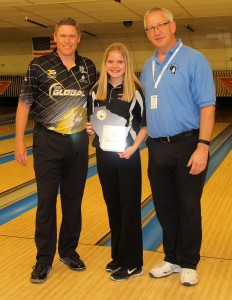 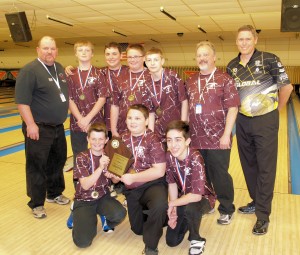 The team event consisted of 12 baker format games, with standings determined based on total scratch pinfall.  In the boys/coed division, the Menomonee Falls squad was crowned our champions with a total pinfall of 2,124 (177.0 average).  Defending champions K-Town II of Kenosha, repeated  with a score of 2,130 (177.5 average) in the girls division.

Full results may be found on our WI MSBC web page.

This year’s tournament had some extra excitement in the singles event when Oshkosh’s Brady Lairson rolled his first ever 300 game!  The perfecto was also the first ever in the Wisconsin Middle School State Bowling Championships’ history.

We are most grateful for the generous support this event received from our sponsors 900 Global and QubicaAMF.  As part of their sponsorship, 900 Global staff and PBA star Chris Barnes participated in our event.  He spoke to the players and their families about what it was like to make the transition from youth bowler, to collegiate athlete to Team USA and PBA star.  Chris was also on hand to autograph QubicaAMF bowling pins as part of a fundraiser to support the WI Middle School Bowling Club.

BCAW thanks Ashwaubenon Bowling Alley proprietor Dave LaBar and his outstanding team for all they did to assure our event ran smoothly.  We also thank the coaches, volunteers and families who support our program.