The 2016 event had 99 bowling centers participating at the league level, qualifying their top bowlers in ten divisions based on gender and age (U8, U10, U12, U15 and U20) to move on to competitions held around the state in 14 regions.  From the regional level, the U12, U15 and U20 moved on to the state finals.  We had 55 youth bowlers in the younger age groups win $100 scholarships for their placement at the regional level.

The Wisconsin Pepsi USBC State Finals were held at AMF Bowlero in Wauwatosa, where we crowned 12 champions:

In addition to scholarship money, USBC Junior Gold entries were awarded by USBC to the champions or the highest finisher if the division winner had already secured their spot into this July’s event in Indianapolis.   Wisconsin will be well represented this year in Indy!

In total, over $19,000 in scholarships were awarded to 98 Wisconsin youth bowlers participating in this year’s Pepsi USBC Tournament.  This was made possible in part through the sponsorship of Pepsi and BCAW’s use of $2,800 in lapsed funds from prior year’s events. 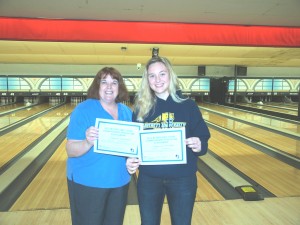 On behalf of USBC and BCAW, we appreciate all of the centers who participated at the in-center qualifying level and those 14 centers that hosted our regional events in March.  A special thank you goes out to Dan Patterson, Area Manager/Milwaukee for AMF and his team of staff and volunteers.

A ball raffle fundraiser was made possible by Storm Products and AMF Bowlero!   While the original raffle was for one Storm bowling ball, Patterson donated a second ball on behalf of AMF Bowlero.

Full standings will be posted this coming week on the BCAW website’s Pepsi USBC Tournament page.