Held in conjunction with the 2017 WI HSBC State Bowling Championships at AMF Bowlero in Wauwatosa, the popular Storm Doubles Scholarship Tournament had a record 291 entries this year.   Thanks to the $2,000 sponsorship from Storm, we awarded nearly $5,000 in scholarships to 30 teams.

All teams bowled four baker format games, with scholarships being awarded based on total scratch pinfall.

In the girls’ division, first place went to Erika & Bryanna Kisting of Iola-Scandinavia HS with a score of 894.  The team earned $350 which will be split equally and deposited into their SMART scholarship accounts administered by the USBC.  They edged out the runner up team of Allison Dempski and Hannah Yelk by a mere four pins.  Low to cash was 826 for a scholarship prize of $70 for eighth place.

The boys’/coed division was won by Brett Schulze and Tayler Dunn of Monona Grove HS with a score of 949.  They earned the top scholarship prize of $470.  Tayler Dunn also teamed up with Austin Minor for the second place finish at 940.  Paying 22 places, low to cash was 865 for $80.

The tournament’s high game of 299 was rolled by Collin Shedlbauer and Theresa West of Antigo HS. 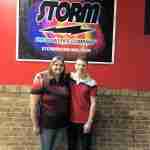