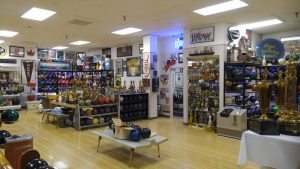 With summer right around the corner, if you are looking for a fun road trip, pack up the family SUV and head west on I80 to Omaha!  That is just what I did in April, visiting Memory Lane Bowling Museum.

As anyone who follows me on Facebook knows, I am like a kid in the candy store when visiting bowling centers throughout our great state.  Wisconsin may be home to the most “vintage” era bowling lanes in the United States.  So it is a rich environment for a bowling geek like me.  I have seen bowling lanes in small community centers and local taverns that are truly like walking back in time.

Memory Lane Bowling Museum is probably one of the most extensive museums open to the public that features bowling memorabilia from throughout America’s love affair with the game.  The museum includes items from the private collections of local businessmen JC Cramer and Ted Baer.  During my visit, it was Ted who greeted me and my travel companion and gave us a tour of the 100’s of items available for viewing. 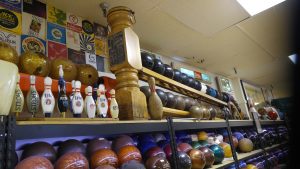 Bowling balls and pins dating back to the early 1900’s are on display, as is a manual pinsetter.  Baer said that when folks visit, they typically go right for the bowling balls, reminiscing about the ball they used for their first 300 game or 700/800 series, or some other memorable accomplishment.   For me, it was about the Ebonite Gyro II (aka Earl Anthony “BIG E”) circa 1972 and an AMF Gold Angle bought when I returned to the game after several years away.  My has the game changed.

There are also several nice displays of bowling awards through the decades including ABC, WIBC, AJBC, YABA and several local associations and bowling centers.  Ornate championship trophies and medals are also on display including items from PBA and FIQ events.

After the passing of Dick Weber, his family donated a significant number of personal treasures to Memory Lane.  There is a small area with some of the items on display, including the last bowling ball used before his death.  Unfortunately, the ball has suffered a large crack . . . perhaps another sign of the changing times.  I would much rather remember Mr. Weber rolling that AMF Amflight Magic Line “Three Dot” from back in the 1960’s!  For those too young to know what I’m talking about, check out the YouTube video from the 1966 BPAA All Star Championship match featuring Weber vs. Nelson Burton, Jr. (https://youtu.be/2lRVPJJXPho).

For anyone considering a visit to Memory Lane Bowling Museum, you will need to call ahead as tours, while free of charge, do require an appointment.  Ted Baer may be reached at 402-306-2602 . . . tell him “Yvonne Bennett sent me!”
###