I was excited to visit with Michael Hoehnen and learn more about his bowling background and his recent purchase of Fox Run Lanes. 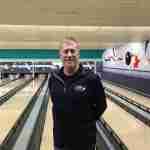 This fall, Hoehnen purchased Fox Run Lanes and renamed it to its original Foxx View Lanes name and he’s been busy ever since putting in long work weeks at both centers. Hoehnen told me he’s really learned patience the last few months as everything you want to get accomplished sometimes takes more time or you run into delays or problems. With the purchase of Foxx View Lanes, Hoehnen is doing his part to keep bowling strong in Waukesha.

Hoehnen is energized by the challenges of operating two centers and will be happy when the renovations at Foxx View are complete.  He loves when Foxx View bowlers notice and appreciate the improvements being made.

The best advice he received is learning to bite your tongue at times, listen and do your best to fix the problem at hand. Hoehnen takes pride in having the pinsetters running properly. He’s a bowler too and no bowler likes it when a pinsetter is not working well.  Hoehnen’s most cherished bowling moment is his first 300 game which was bowled at Sunset Bowl.

Work is Hoehnen’s passion, but his faced beamed with pride when he talked about how he enjoys watching his daughters compete in sports. McKaelee’s passion is soccer and Jaelynn’s is bowling.

Hoehnen’s hope for the future is to keep working and running both centers for a long time or until he can groom Jaelynn to take over.  But, that won’t happen until after Jaelynn finishes high school and goes on to earn a college degree.

It’s easy to predict that Waukesha’s bowling is in good hands for many years to come.