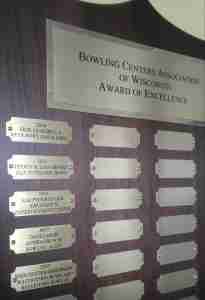 Those recognized with the “BCAW Award of Excellence” will be selected annually from nominations submitted to BCAW for consideration.  The nine-point criteria for this award focuses on demonstrated results in helping to grow bowling not only in their center but in their community and the state.  Supporting the BCAW and its programs through engaged participation will be a hallmark of recipients.

The nomination form for the 2018 awards may be found HERE.  Completed nominations are due to BCAW Executive Director Yvonne Bennett no later than August 31, 2018.  Nominations will be reviewed and award winners selected by a committee appointed by the BCAW President.  Winners of the “BCAW Award of Excellence” will be recognized at the luncheon held in conjunction with the BCAW Annual Meeting & Trade Show on Monday, October 1st at the Kalahari Resort in Wisconsin Dells.