BCAW proudly administers the Wisconsin Middle School Bowling Club.  One of the 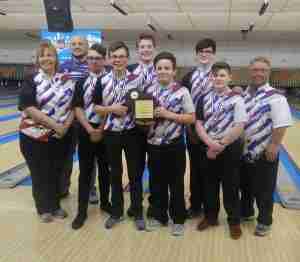 This season we had 136 middle school teams, with 54 advancing to the state championships (42 boys/coed and 12 girls teams).  Additionally, we held a singles competition with 240 players competing in one of seven divisions.

Our boys/coed champion was the team from Oostburg/Horace Mann.  They averaged 192 for their 12 baker games.

In the girls team event, Lincoln/Mahone/KTEC/Lance averaged 171 to take home the title. 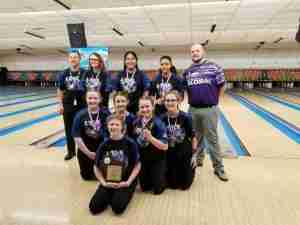 We had some added excitement in the singles event when Travis Weber of Kenosha opened the day with a 300 game.  It was the seventh grader’s first 300 game, with his proud dad/coach nervously watching when Travis stood up in the tenth frame and threw three perfect strikes!  The action was captured by Dan Schmidt/Anchor Lanes and shared on Facebook.

Thanks to the sponsorship of 900 Global, PBA touring player Anthony Lavery-Spahr helped to celebrate the occasion with a specially autographed bowling pin to commemorate Travis’ accomplishment.  MSBC Chairman Dick Zierke was also on hand for the presentation.

BCAW would like to thank everyone at 900 Global for their continued sponsorship of our MSBC State Championships.  We also appreciate the generous support from QubicaAMF for the donation of bowling pins for Anthony to sign.