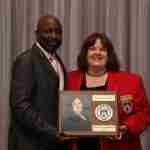 On November 2, 2019 BCAW Executive Director Yvonne Bennett was inducted into the Nation’s Capital Area USBC Association (NCAUSBCA) Hall of Fame for her performance on the lanes in her home association in the Washington, DC Metro Area.

“While many know Yvonne for her work for bowling here at BCAW, what most do not know is that she was a high average scratch bowler and fierce competitor before coming to Wisconsin” remarked BCAW President Erik Gialdella at the recent BCAW Annual Meeting and Celebration of Excellence Luncheon held in Green Bay.

A five-time scratch titlist in the NCAUSBCA, including two team championships, two singles and a doubles title; Bennett was a trailblazer, bowling in numerous men’s scratch leagues as they opened up to women in the mid-1970’s. To pursue competitive opportunities, she never shied away from shoeing up with and against the men, often bowling in scratch tournaments and pot games throughout Virginia. In 1996, she was one of the first women to become an ABC Lifetime Member.

From her hall of fame bio: “At the age of 21, she led the Women’s Division in each of the five rounds en route to becoming the youngest female MWBPA Scratch Invitational Champion in 1979. She appeared in the WDCAWBA Top 10 Ranking in 1978-1979 (#8) and 1979-1980 (#7). Returning to the lanes after a five-year layoff due to work commitments, she placed fourth on the association’s 1987-1988 Honorable Mention listing with a 188.2 average in her only league.”

While attending George Mason University, she began a lifetime of service to bowling as a volunteer youth league assistant, a Certified AJBC Youth Coach and youth director, and a member of the Bowl America Tournament Committee. As a member of the WDCAWBA Board of Directors, she wrote the “Tison’s Corner” column in Bowl Magazine during the 1980-1981 bowling season.

Taking a position at Bowling Headquarters in Greendale in 1994, Yvonne moved to Milwaukee. She bowled for six seasons in the Greater Milwaukee Bowling Association before a knee injury forced her into early retirement from competition. To this day she misses time spent on the lanes with friends and teammates, but makes up for it in her work with events like our HSBC & MSBC State Championships and the Wisconsin Vintage Alleys Tours. 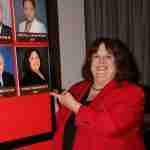 Yvonne adds: “I’m just a bowling alley rat from the 70’s & 80’s who loves everything about bowling, especially the lifetime friendships I’ve made and continue to make. To be able to pay it forward today serving the industry is what I hope folks recognize as my greatest accomplishment. Not all talented bowlers will go on to have successful careers on the lanes, so being able show a career path off the lanes is important to me as well.”

BCAW is very proud to have Yvonne’s passion and dedication to bowling, working for our members and their bowlers throughout Wisconsin. Congratulations Yvonne!