“Find a job you love, and you’ll never work a day in your life!”  Great words to live by.  Jason Resch says he hasn’t worked in 13 years.  To be honest, I know better.  Owning a bowling center, especially a smaller one is a lot of work.  Jason has given so much to the game he’s loved since high school, and has made it look effortless. 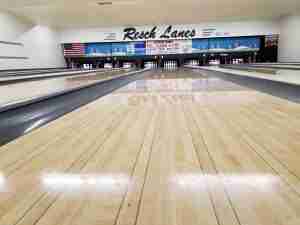 In February 2008 Jason & Jenny Resch purchased the eight lane bowling center in Wittenberg, appropriately renaming it Resch Lanes.  Jason has more than once referred to his community bowling center as “his little clubhouse in the woods.”  I have visited Jason several times when my travels have brought me “north of 29.”

Sometimes he’s bowling or shooting pool, but he is also a working proprietor who puts in a lot of time and effort to make sure his guests have a great time. I will say any time I stop by, Jason always has a welcoming smile on his face, as he offers up a beverage of your choice.

During his 13 years as a proprietor, he has created a warm and friendly vibe for all of his guests.  Adults will appreciate the activities and programs Resch’s offers year-round, not just the bowling.  This past summer when the COVID-19 pandemic created concerns about social distancing and being inside, he swiftly moved to growing his outdoor bean bag leagues.

His 40 bags teams plus a great fish fry and carry-out business are what kept him afloat through some otherwise pretty dark times for bowling center owners throughout Wisconsin and the country.  You can hear in his voice the sincere appreciation of those who continued to support his family business throughout the pandemic.

As a bowling center proprietor, Jason has created the environment for bowlers to excel on the lanes.  In 2018 he invested in topography work done by Bowling Voodoo out of St. Louis.  With a truer lane surface and reinforced flat gutters, the scoring environment was improved.

Resch reports most higher average players, say 180 and above, saw improvements in scoring.  As he said, you just carry one more 10 pin each game and your score will go up.

Last bowling season (2019-20) was one Jason will not forget, when the Wisconsin State USBC men’s high league average was bowled in his Wednesday Men’s League.  He told me “Having a front row seat to the incredible season by Brian Mattmiller was amazing.”

On Wednesday, January 20th Mattmiller was honored by the WI State USBC Association and the Wausau USBC for his 251.56 league average.  Who would have guessed the season that started with a less than remarkable 646 series back in September would conclude abruptly in March due to the “Safer at Home” order. 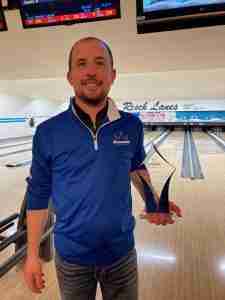 During his run to a 251 league average, Brian had eight 300 games and five 800 sets, with only one game the entire season under 200.  But don’t think of him as just some one-house bowler.  He started his honor score rampage with an 856 series that included a 300 on 9/14/19 at Coral Lanes in Rothschild. He also booked two averages in the 230’s at North Star Lanes, his home center in Antigo.

Getting to know Mattmiller a little bit through his volunteerism has been a joy.  As a Brunswick regional staff player, and the pro shop operator at North Star Lanes, he has provided additional resources to his community.  Brian is involved with the WI High School Bowling Club, where he coaches the Antigo HS team, as well as through his efforts organizing and qualifying teams for the WI Adult Youth Scholarship Tournament over the past couple of years. 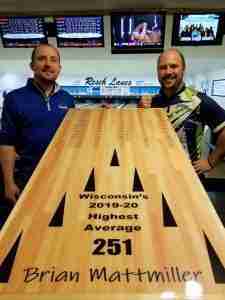 It is especially rewarding to hear of the efforts of both Jason and Brian as they provide opportunities to families and bowlers in their area.  I always enjoy hearing how people got started on their bowling journey.  Jason said since high school he knew he wanted to own a bowling center; and Brian wants to pay it forward for other kids to have the same opportunities he had when he was part of the first Antigo HS bowling club program back in 2001 as a high school junior.

Bowling is very fortunate to have such wonderfully passionate people involved and making opportunities possible for others! Jason put it best when he told me “Life goes by extremely fast; I want to make sure I have fun while it lasts.”